“Michael Morgenstern is an attorney with integrity and compassion. I was walking in the cross walk with ample seconds to cross when I was hit by a D.C. Circulator bus. I suffered multiple fractures of my left wrist and extensive bruising on my left side as well. As a visitor to D.C., I returned to Chicago and underwent surgery on my wrist.

Voted by Washingtonian magazine as one of the best personal injury attorneys in the city, I knew I had made the right choice after my first conversation with Michael. Kind and patient, he listened and responded in detail assuring me that my injuries were serious and deserving of compensation. Michael was thorough, extremely polite and genuinely concerned. Never too busy to answer my many questions, Michael was meticulous and accommodating. I cannot praise him enough. Not only was I compensated for my injuries, but I was treated with the utmost respect. I highly recommend Michael Morgenstern to anyone with a serious injury.”

“A few years ago, I was involved in a deadly car and bus collision. I had been a passenger on the bus, and the incident was absolutely terrifying. Obviously I survived, but the crash caused serious injuries to my back, legs, ribs and clavicle. For days on end, I laid on the bed of a rehabilitation center barely able move my body; I was physically and emotionally broken. Most of the several attorneys interviewed were impersonal, unprepared, and truly made me feel like everything was a lost cause. Then I came to find a miracle worker, the man who heard my voice and won my case, Michael Morgenstern.”

“I was injured in a serious car accident. My knee and hand were broken and I had to undergo surgery. Lying on the hospital bed with a broken body and mind, I didn’t know what to do. Then a friend gave Michael’s phone number to me and I called. That was one of the best decisions I ever made. Michael was very patient, prompt and very experienced, and he handled the case very well. He not only helped me settle the case, but more importantly he truly cared about my injury and made sure I had the best recovery I could get. I highly recommend Michael to anyone in similar situation and needs professional assistance. Michael is the best!”

"Michael Morgenstern was my lawyer, not my doctor, but he saved my leg. I was in a serious motorcycle accident. The emergency room doctors and my own family physician told me my leg injury would be fine. Michael strongly recommended that I see an orthopedic surgeon as soon as possible and he set up an appointment. When the doctor took a look at my leg, he immediately called an ambulance to take me to Suburban Hospital. The orthopedic surgeon followed the ambulance in his car. I arrived at the hospital and went directly into surgery. My leg was saved and I owe it to my lawyer, Michael Morgenstern."

"During my career as an attorney, as well as a judge, I had the opportunity to observe hundreds of attorneys. Without condition, I can say that Michael Morgenstern was the best. That is the reason that I chose to retain him to represent me when I was involved in a serious motor vehicle accident.” 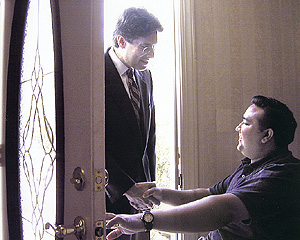 "As I lay in a coma and having both legs amputated above the knees, my family interviewed numerous attorneys up and down the East Coast. Unanimously, my family and I chose Michael Morgenstern to represent us against the big insurance companies. Michael was extremely patient and concerned for both our financial and emotional losses. He displayed great poise and an overwhelming knowledge of the nature of my case. I am happy to say he is not only my attorney but a good friend of the family. As a result of his representation, I was awarded roughly $60 million by a jury of my peers in the Circuit Court of Baltimore, Maryland.

"We turned to Michael Morgenstern for help when my mother was seriously injured as a result of negligent care at a local hospital. After the case settled, he continued to call her on birthdays and holidays just to say hello. My sister and I felt that Michael saw us as real people and not just another case. When I was in a car accident years later, I immediately knew who to call for help.”