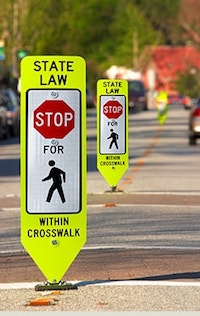 A few years ago, I wrote an article for the Legal Times, “Dancing with the Cars: Do Pedestrians Really Have the Right of Way?”

Since then, not much has changed legally. There has been, however, a dramatic rise in serious pedestrian accidents including a spike in fatalities. Distracted drivers and distracted pedestrians are often to blame. But even when both drivers and pedestrians are alert, there’s a very dangerous road sign that no one seems to understand. It’s the big yellow sign that says:

The key word here is:

If you are a pedestrian already IN the crosswalk and trying to cross the street, the law states that the driver must stop and allow you to cross.

If you are a pedestrian standing on the curb AT a crosswalk, the driver does not have to stop and allow you to cross.

Do you see the difference?

Ok – so now you are un-confused and understand the law. But, let’s be perfectly clear: JUST BECAUSE YOU’RE IN THE CROSSWALK DOES NOT MEAN YOU’RE SAFE.

Dangerous crosswalk situation #1: Car A is approaching the crosswalk within the speed limit when a pedestrian suddenly steps into the crosswalk and Car A is unable to stop. Who is at fault? The pedestrian, even though he was in the crosswalk. The law states that a pedestrian cannot walk into the path of a vehicle which is so close that it is impossible for the driver to yield.

See what I mean? No matter who is at fault, the pedestrian, unfortunately, is always the loser. “Pedestrians have the right of way” is only sometimes true. “Pedestrians always get the worst of an accident” is ALWAYS true.

So, here are my top 5 warnings to pedestrians (including my own kids):