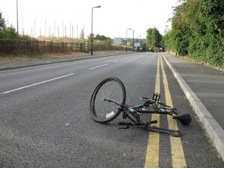 Whether for commuting, exercise, sight-seeing, or just for the fun of it, biking in the Washington, DC metro area is booming. Automated bike-share systems provide 2500 bicycles at over 300 stations across Washington, D.C., Arlington and Alexandria, VA and Montgomery County, MD. Dedicated bike lanes are constantly being constructed and we have hundreds of miles of scenic bike trails, including the Capital Crescent Trail, C&O Canal Towpath, Mount Vernon Trail, and Rock Creek Park

Unfortunately, 50,000 people are injured in bicycle accidents every year. A bicyclist is extremely vulnerable to injury when struck by a car. Bicycle accidents are caused by a motorist's negligence or inattentiveness while operating his vehicle. Many times a driver will turn directly in front of a bicyclist or pull out into traffic in front of the bicyclist. Sometimes a driver won't give a bicycle enough space while passing either forcing the bicyclist off of the road striking the cyclist with the side of the car or the side-view mirror. Often, after parking a car, a motorist will open the door into the path of an oncoming bicyclist propelling him over the car door.

Bike accident cases can be complex since laws vary in each jurisdiction. You can ride your bike on the sidewalk in Montgomery County, MD and in Alexandria, VA, but not in downtown Washington, DC. Bike accidents may involve cars and pedestrians which involve other sets of laws. If you’ve been seriously injured in a bike accident, seek out the advice of an experienced bicycle accident attorney. Morgenstern Injury Lawyers has successfully litigated bike accidents throughout the DC, metro area. Some of our cases include:

Bicycle Accident: $300,000 Settlement (Policy Limits)
Cyclist Injured When Parked Motorist Opens Car Door (District of Columbia)
A cyclist was biking on a street in Georgetown when the driver of a parked car suddenly flung open his car door. The cyclist was unable to stop in time and hit the open car door. The impact caused the cyclist to fly over the car door and he broke his hand and pelvis. Our firm was able to obtain the total of insurance coverage on behalf of our client which helped pay for his medical expenses, lost wages, pain and suffering and damage to his bicycle.

Bicycle Accident: Confidential Settlement
Cyclist Struck by Hit and Run Driver
A medical doctor riding his bicycle to work at National Institute of Health (NIH) was struck by a pickup truck making a left hand turn. Because of fractures to his hand, our client was not able to return to work in the emergency room. The driver who caused the accident fled the scene. We were able to pursue the claim for injuries with the doctor’s own car insurance company including his sizable lost wage claim.

Bicycle Accident: Confidential Settlement
Car Tries to Overtake Cyclist at Light
A cyclist and a car both came to a stop at a traffic signal. When the light turned green, the driver attempted to beat the cyclist by accelerating to 20 mph. In doing so, the driver veered into the cyclist and the cyclist was thrown off his bike and landed on the road. By interviewing witnesses, our firm was able to assist the local police department in determining the driver of the striking vehicle. We were able to recover for our client his medical bills, lost wages and a large amount for his considerable pain and suffering.

Bicycle Accident: Confidential Settlement
Cyclist Hit in Crosswalk
A cyclist was crossing an intersection at the crosswalk when she was hit by a car making a right turn. The driver failed to see the cyclist. Our client suffered facial, head and leg injuries. She was a research scientist commuting to NIH to begin her work day. Our client faced no recovery based on the state of Maryland bicycle law prohibiting riding on sidewalks. By researching this issue, we were able to locate Montgomery County exception to the State law there-by permitting our client to recover for her injuries as well as permitting her to be reimbursed for her torn clothes and damaged laptop.